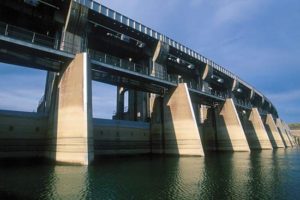 Fort Peck Lake, created by the building of Fort Peck Dam that was finished in 1940, is the largest lake in Montana. The dam itself is the largest earth-filled dam in the world, and measures 21,026 feet in length with a maximum height of 250.5 feet. The lake is 134 miles long, has 1,520 miles of shoreline, and a maximum depth of 220 feet.

The Power Houses can be toured Memorial Day through September 30th 9 am to 5 pm.

Fort Peck Dam is located in the small town of Fort Peck, Montana. Fort Peck Dam was authorized in 1933, as part of the public building boom that occurred during the Great Depression years. During the construction phase, the town of Fort Peck was a bona fide boomtown, as thousands of workers were involved in creating the dam. Additionally, not only did they build this huge dam, they also built a recreation area around the dam. This recreation area consists of several nice campgrounds, some smaller ponds, day use areas, and interpretative sites. 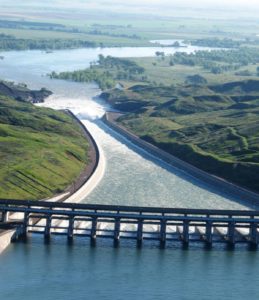 A drive on MT-24 makes a stop overlooking the Spillway unavoidable.

Fort Peck Lake is known throughout Montana for its fishing. Each year the Governor’s Cup is held at Fort Peck Lake, which attracts anglers from the surrounding states in search of large walleye. Hunting is also a very popular activity around Fort Peck. The Charles M. Russell Wildlife Refuge has excellent hunting for deer, elk and upland birds. The Fort Peck Interpretive Center and Museum is informative and entertaining for all ages. They are open daily May 1st through September 30th 9 am to 5 pm. 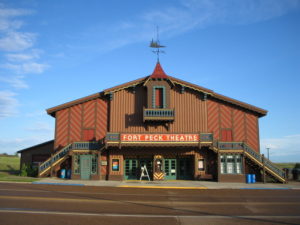 Standing majestically atop the rolling prairies of Eastern Montana, the Fort Peck Theatre is one of the state’s most magnificent treasures. The theatre was originally built in 1934 as only a temporary structure; its beauty and sound construction have stood the test of time. Today it is a vibrant, vital part of community and culture for residents and visitors alike. Design and construction of the Theatre was carried out by the United States Army Corps of Engineers. It was a labor-intensive project which integrated the New Deal arts and crafts tradition with a Swiss chalet motif. Many elaborate, decorative appointments can be found both inside and out.

Overhead in the auditorium the hand crafted light fixtures are some of the finest examples of 1930's artisanship seen today. Created locally in the Corps of Engineers shop, the fixtures were built by hand, using metal strapping and hand-blown glass. Also of note are the massive, hand-hewn beams that span the width of the auditorium.  Each is nearly two feet thick and 74 feet long. Proudly perched atop the highest point of the Fort Peck Theatre is a beautiful weather vane, specifically designed for the Theatre and included in the architect's original drawings.  It is still in fine shape today, and remains a testament to the craftsmen and construction of the period.

On Friday, November 16, 1934, only 9 short months after construction was begun, the Fort
Peck Theatre opened its doors as a movie house, showing The Richest Girl in the World, starring Miriam Hopkins and Joel McCrea. During "The Dam Days", movies ran 24 hours a day, seven days a week, often with every one of the 1,209 seats filled.  People sometimes stood in lines seven blocks long to purchase tickets. The adult admission price was 40 cents on the main floor, 30 cents in the balcony. Children attended for a dime.  During this time, the population of the area in and around Fort Peck was over 50,000 and an evening at the movies was a special event for young and old alike. One of the incredible treasures remaining from this time period is currently on display in  the lobby of the Theatre. The Arc movie projector, one of two used by the theatre during the 1930's, is a 35mm carbon-rod projector that offers a unique glimpse back to the technology of the times. The second, identical projector is on loan to the Pioneer Museum in Glasgow.

Today, the Fort Peck Theatre stands tall and beautiful, ready to entertain this and future generations. Under the care of devoted volunteers and loyal supporters, its beauty is restored and it remains a significant part of Montana life.